10 Most iconic landmarks in Europe to explore in 2020 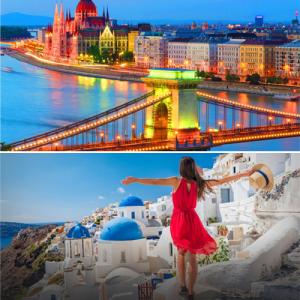 Europe is the world's most visited continent, and with good reason too. Located in the Northern hemisphere, it is bordered by the Mediterranean Sea on the south, the Arctic Ocean to the north and the Atlantic Ocean to the west. It is separated from Asia by the Ural river, the Caspian Sea, the Black Sea and the Turkish Straits. Although the reach and region of Europe has been defined and redefined many times over the years, today, the continent is made up of forty-four countries, the largest being Russia and the smallest being Vatican City. Every country and city offers a unique cultural experience for tourists, featuring arts and theatre, attractions and monuments, food and drink, and festivals and celebrations.

Europe is the perfect place for travellers of any kind. If you are looking for a backpacker trip or a luxurious relaxed trip, Europe has something for everything. From stunning beaches in Greece, ancient Roman history to irresistible shopping in Paris, Europe is a paradise for tourists. With all the countries in Europe being very well connected with each other, travel within the continent is a piece of cake. Steeped in history, Europe is blessed with an array of attractions spanning the centuries and a variety of cultural influences, from Hagia Sophia to the Vatican City. 10 best-rated tourist landmarks in Europe.

St. Peter's Basilica, Vatican City, Italy
A must for anyone visiting Rome, St Peter's Basilica in Vatican City is the most important church in the Catholic world. Thanks to the impressive Piazza San Pietro, on which it's situated, and its stunning Renaissance interior, which was principally designed by Michelangelo and Donato Bromante, more than four million tourists visit each year.