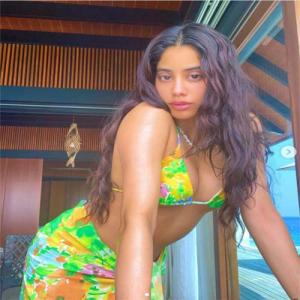 Janhvi Kapoor might be the 'last to get on the Maldives bandwagon', but she's making the most of her vacation. The actress is churning out some serious fashion goals as she sets the Internet on fire with her impeccable choice of swimwear. Be it her shimmery white monokini or the cheerful sarong, Janhvi made heads turn with her stunning sartorial choices. In her latest Instagram post, Janhvi is seen flaunting her toned abs in a green bikini with floral prints. She captioned the post as, "Island Girl".

The post features a picture of the actress staring right into the camera giving a sultry expression, whereas, in another one, she strikes a goofy pose sticking a tongue out. Janhvi looks adorable as she ties her hair in two braids for a selfie.

Apart from this, Janhvi also posted snapshots of her holiday in the Maldives, posing by the sea at sunset in a hologram monokini. "Iridescence," she wrote as a caption for the image. Earlier, Janhvi also shared pictures at an infinity pool. She posed with a plate full of food in an image and is seen hanging out with friends in another.

On the work front, the actress finished shooting for her film "Good Luck Jerry" last month. She was last seen in the film "Roohi", which also starred actors Rajkummar Rao and Varun Sharma. Roohi marked the first-ever collaboration between Rajkummar and Janhvi. The horror-comedy also became one of the first films to arrive in theatres after the government allowed cinema halls to operate at full capacity from February 1 with COVID-19 safety protocols put in place.