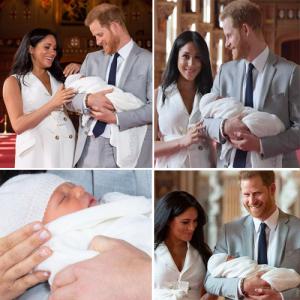 Finally have a look at the Duke and Duchess of Sussex's baby for the first time. Meghan Markle and Prince Harry welcomed the baby boy on May 6. After spending some quiet time with family post-delivery, the couple is sharing the new addition with the rest of the world for the first time at Windsor.

Due to the rain, Meghan and Harry posed for photos inside Windsor Castle. When asked about her new son, Meghan adorably told reporters, "It is magic, and it is pretty amazing. I have the two best guys in the world. And so I am really happy."

As usual, Meghan and Harry proved that they're completely smitten with one another with several sweet moments of PDA. While Harry cradled the royal baby, new mom Meghan was on hand to check on the little one, and gaze adoringly at her husband in the process.

Meghan and Harry announced the arrival of their son hours after the delivery with a celebratory post on Instagram that read, "It's a boy!" In the caption, the couple revealed that their baby weighed seven pounds, three ounces at birth.